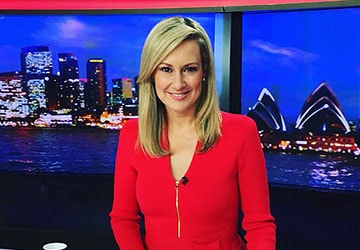 Melissa Doyle was co-host, with David Koch, of Channel Seven's Sunrise, Australia's highest rating breakfast show, for 14 years. During this time she become one of the most popular faces on Australian television, highly regarded for her warmth and credibility.

Since stepping down from her Sunrise role in mid-2013, Melissa has been very busy. She hosts the 4PM National News Service, and is a Senior Network News Correspondent and Sunday Night contributor. She is also the weekend breakfast host for radio station smoothfm between 6am and 10am each Saturday and Sunday.

During her career Melissa has covered major news stories from around Australia and the world - as diverse as state and federal elections, the rescue of the trapped miners at Beaconsfield, the Royal Wedding of Prince William and Catherine and the Inauguration of Barack Obama, the new Pope and the Queensland floods. She also covered the Sydney, Athens and Beijing Olympic Games, the Queen's Diamond Jubilee and The Academy Awards.

She is the National Patron for Make A Wish and is an ambassador for World Vision, the Alannah & Madeline Foundation, Adopt Change, Westmead Children's Hospital, Children's Cancer Institute and the National Breast Cancer Foundation. Melissa is a Board Member of the George Gregan Foundation.

Melissa is also an ambassador for the Federal Government's National Road Safety Council and is the Number One Ticket Holder for the GWS Giants (AFL) and Whittlesea Eagles (Vic AFL). She is also the Chairperson for the GIANTS Foundation Charity, established in 2013.

As well as her long list of professional achievements to date, Melissa is the co-author of The Working Mother's Survival Guide and the author of the best-selling memoir Alphabet Soup.

Talented, smart and warm-hearted, Melissa has been nominated for multiple Silver Logies as Most Popular Television Presenter, voted one of the 'most real celebrity mums' and regularly polls in the top 50 of Readers' Digest's Most Trusted.